Early last week a couple of laptops arrived from Japan using the Core M version of Intel’s Broadwell processor. Straight into the lab, and within a few hours the first sight of the die structure, confirming that it is indeed the 14-nm technology.


This is an image of a die that was given a bevel polish, so that we can look at the transistors in plan view: 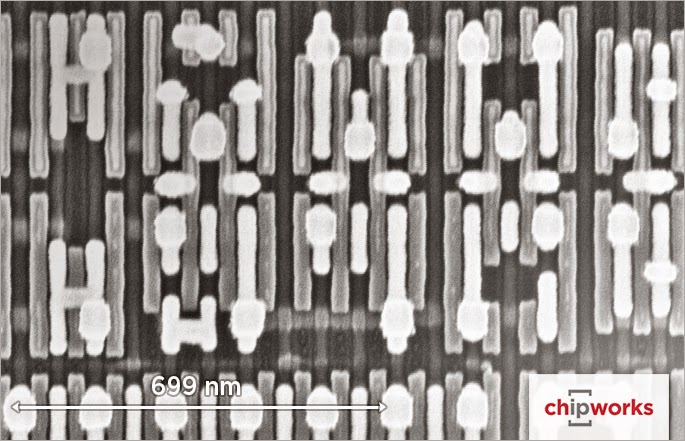 It’s a bit fuzzy, due to the high magnification, and construction we have going on next door; but we have measured ten contacted gate pitches as you can see, and that looks pretty close to the 70 nm that was announced by Intel back in August. 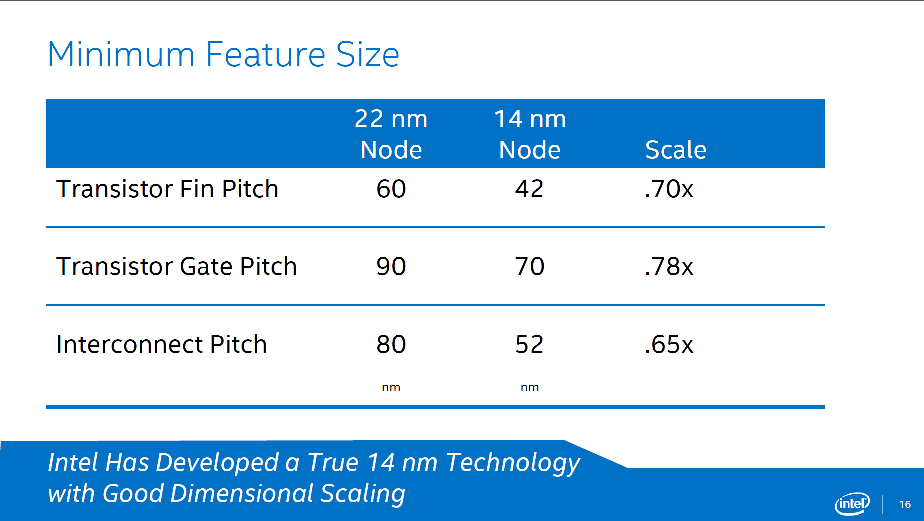 On another part of the bevel we can see the fins, and here we have counted 20 pitches: 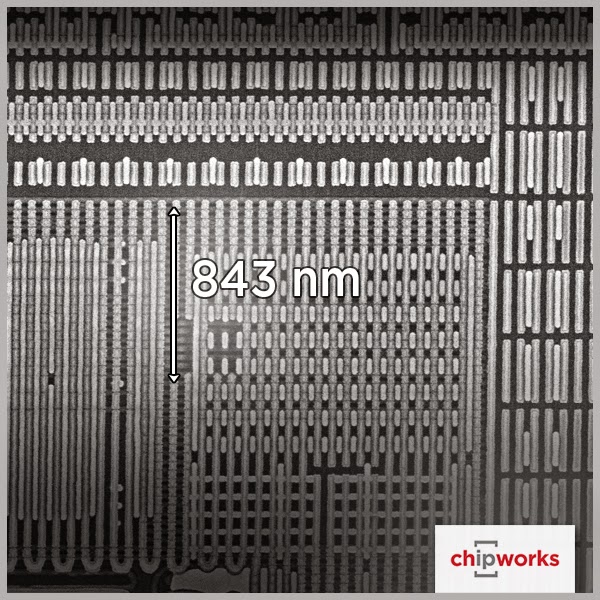 Which agrees with the 42-nm pitch in the Intel webcast. So far, so good!
If we look at the cross-section, Intel has stayed with their thick top metal that they have been using since the 65-nm node, which means that we have to squint awfully hard to see THIRTEEN layers of metal, and a MIM-cap layer under the top metal. 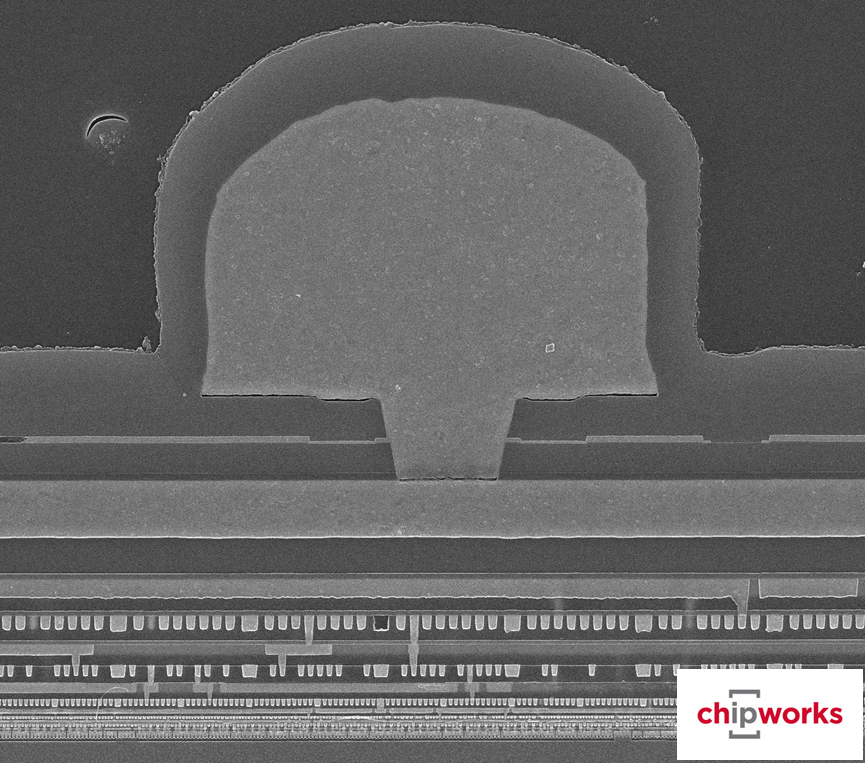 ﻿A look at the edge seal, which doesn’t have the top metal or the MIM-cap, makes it easier to count twelve layers: 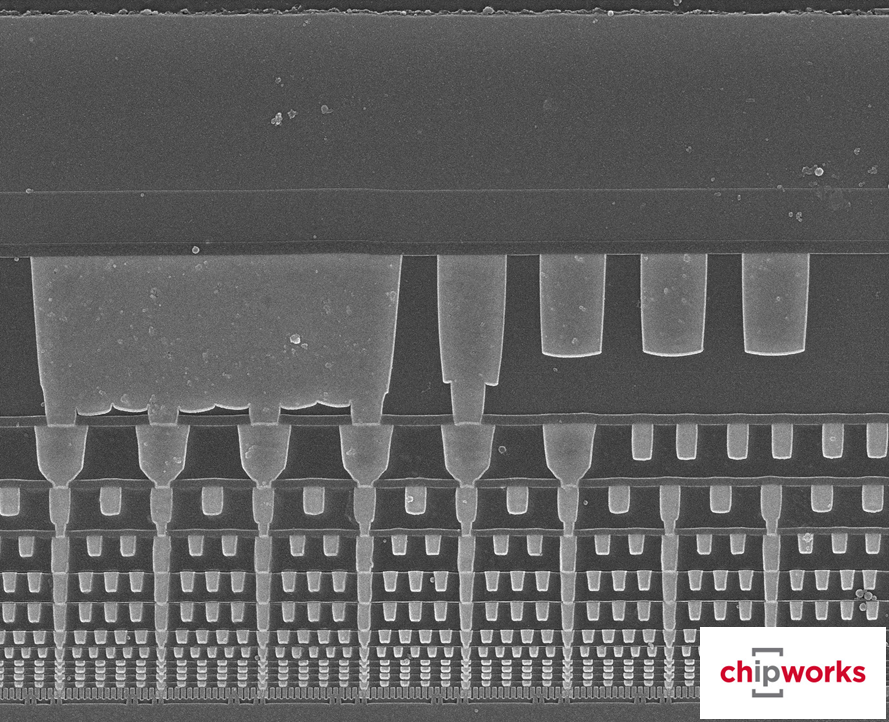 We are used to seeing twelve-plus metal layers in IBM chips (their 22-nm Power8 has fifteen!), but Intel has been using nine for the last few generations, going up to eleven in the Baytrail SoC chip.
Intel quoted 52 nm interconnect pitch, but we see 54 nm: 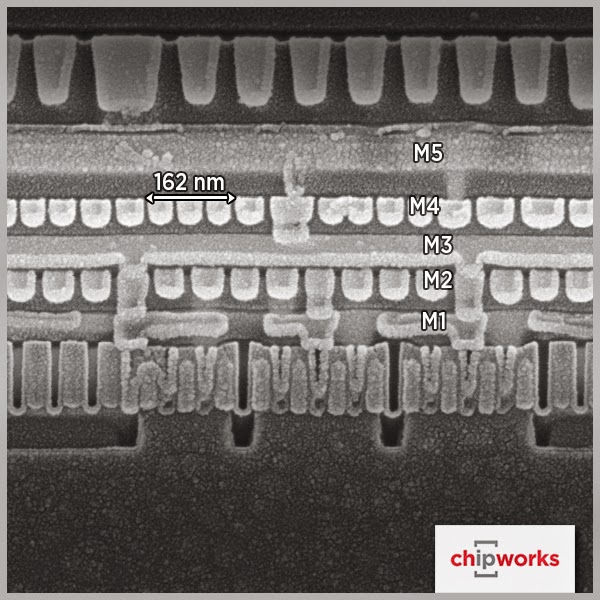 The cross-section seems to show that essentially the 14-nm process is a shrink of the 22-nm technology, with the modified fins; the gate metallisation looks similar to the 22-nm, with tungsten gate fill as in the earlier process. (As an aside, this will make it the fourth generation replacement metal gate process – this technology has legs!)
Intel and IBM are giving late news papers at IEDM in December, and apparently there are air gaps in the back-end dielectric stack – we have not found those yet. We have confirmed the SRAM cell size in the cache memory is ~0.058 sq. µm.
Our analysis is ongoing, and we look forward to some great images! And as always, we will be doing a bunch of reports..